Heading into a race I usually have an idea of what time I can finish.  For example, I know that on a good race day, I can probably run a half-marathon in just under 2.5 hours (and, again, I remind you that I am NOT a fast runner so don't come at me with your speedy times).  I do my best to train to fidelity because I'm a rule-follower and list-checker and I like knowing that I've done what I could to prepare for race day.  It also just gives me a general idea of what to expect.

I take into consideration things like the adrenaline at the beginning of the race which makes you want to run too fast, how well I've slept the night before, and if I've had an opportunity to use the restroom (it's not ladylike to discuss, but necessary).  Whenever I run a distance for the first time, my goal is always just to finish.  I do not keep up with pace, I do not look at my splits, and I really have no idea what my time is until I'm done.  My fancy watch lets me know when to run and walk and how many miles I've covered.  To have to keep up with all the other numbers is math and I'd rather not think that hard while I'm running.

If I'm running a familiar distance, then I do consider things like time beforehand--but, it's more of a matter of when I can expect to be done so I can carry on with my day.  And in this situation, I have a castle and rides and Storm Troopers to see post-race.  Also, runDisney events are extremely crowded and a lot of people go into them planning to walk the entire distance for a variety of reasons. The first few miles are congested nightmares and there are times you cannot even run because it's so full (especially if you begin in a later corral).  It took me an extra 6-8 minutes to get through the first two miles when I ran the Princess Half.  Dopeys are normally pushed back a corral or two for the half and full marathons since they anticipate our fatigue, so I'm not sure what corrals I'll start in for the 5K and 10K.  The further back you go, the more crowded it becomes (and more walkers).  Additionally, these races start at 5:30am and 5am (marathon) which means we have to board buses around 3am or so 4 days in row.

Now, because this is an endurance event, I've gone back and forth in regards to planning for each race.  Should I just plan to run slow and steady each race in order to save something for the marathon?  Maybe it would be best to walk one of the smaller races?  Maybe I should plan to run half of the half and walk the rest?

There are also characters along the course, but I do not have plans to stop to take pictures with any of them with the exception of Ashoka Tano from Clone Wars.  She's sort of a big deal at our house:


Other than that, I'm not planning on stopping unless it's something fun and crazy that can't be missed.  Some people also plan to ride Everest while running the marathon through Animal Kingdom--I don't have plans to do that due to time and fear that the ride will breakdown and I'll be disqualified.  I've got 7 hours to run this race and while I don't anticipate needing that time, you just never know.  I've paid too much money and ran too many training miles and cannot deal with that level of anxiety on the last day of the event.

Other things to consider--it's going to be warm in the mornings (60s according to the forecast) and warmer on course during the marathon (70s to 80s).  There is also a strong possibility of rain.  I need to consider taking my time in the heat and humidity, making sure I'm fully hydrated (more potty breaks), and remaining aware of my body because my goal is NOT to visit an Orlando hospital.  And I've got a knee that wants to pretend like it's hurt.


This could be an Enneagram 6's worst nightmare--but I'm choosing to remember that we are great at thinking through all the worst case scenarios and making plans to face them.

All of that being written, here are my goals for each race:

5K:  Easy, slow running to shake everything out.  Hopefully less than 45 minutes due to crowds.

10K:  Easy, slow running or maybe walking part of it.  Hoping for less than 1.5 hours due to crowds and walking

Half-marathon:  Even-paced running, expecting some walking to avoid burnout.  Hoping for no more than 2:45-3:00 due to crowds and fatigue and a potty break or two. I have a feeling this will be the hardest day of all.

Marathon:  Just. Cross. The. Finish. Line.  Honestly, I don't even know.  I'm hoping for 5:30ish, with crowds, fatigue, walking, running, and maybe crawling.  I anticipate at least 2-3 potty breaks because I plan to hydrate, hydrate, hydrate.  But, I also want to soak it all in and run without stress and pain.

A letter to the discouraged teacher. 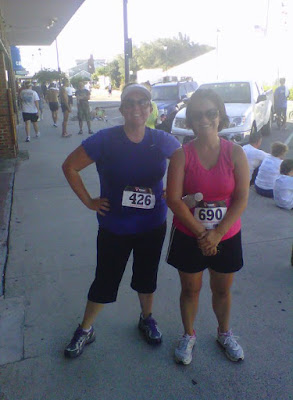